The College of Agricultural Sciences of IUBAT—International University of Business Agriculture and Technology organized a national e-seminar on Hydro-geochemistry and Heavy Metal Contamination of Ground Water of Dhaka Metropolitan City at 10 am on Tuesday, November 10, 2020.

Mayor of DNCC, Md. Atiqul Islam joined the e-seminar and due to his pre-occupation, he made his deliberation at the beginning of the Seminar. He thanked the College of Agricultural Sciences of IUBAT for arranging such an e-seminar on an important and burning issue. He further mentioned that about 49,000 people are habituating in one sq. kilometer area in Dhaka city and it is very difficult to provide them with pure and safe drinking water and other facilities. He requested IUBAT to come forward with proper suggestions so that water contamination with heavy metals, arsenic etc. can be mitigated. Mayor Mr. Islam disclosed that further 10% rebate on holding tax is now given to the Dhaka city-dwellers for rooftop gardening. He also thanked IUBAT for awarding stipends to meritorious students. He also proposed for a meeting with the Vice-Chancellor of IUBAT for further discussion of important issues so that collaborative work module can be established between IUBAT and the DNCC to ensure supply of contamination-free water to Dhaka City dwellers. Mayor suggested that students of IUBAT can work as internees under different sectors of the Dhaka North City Corporation and they will be provided with all sorts of facilities including awarding of Mayor’s certificates.

Prof. Dr. Abdur Rab, Vice-Chancellor of IUBAT while delivering presidential address suggested teachers to take up research studies on drinking water. Prof. Rab further mentioned that the CAS has been working on the development of perennial rice funded under Miyan Research Institute. He also expressed that research on Hilsa Fish can be undertaken to investigate the reasons of migration from freshwater to the deep sea of Bay of Bengal. He thanked all the participants, presenters, guests, faculties and students of IUBAT, electronic and print media and others for joining the e-seminar. Prof. Rab also expressed the hope that alternate sources of drinking water should be found out, for example special reservoir for drinking water, river water, rainwater and other mechanisms of purifying polluted water may bring bright future in this regard.

Krishibid Mr. Selim Reza, Chief Executive Officer of the DNCC participated in the e-seminar and thanked IUBAT for inviting him and mentioned that he is willing to extend cooperation with IUBAT. Prof Dr. Abul Khair, Chairperson of Miyan Research Institute (MRI) of IUBAT gave a brief account of activities of MRI.

Dr. Shaila Sharmin, Associate Professor, CAS of IUBAT presented the keynote paper on Hydro-geochemistry and Heavy Metal Contamination of Groundwater of Dhaka Metropolitan City and she was the main author of the paper that had been recently published in an international Journal. In her speech, she demonstrated different aspects of contamination due to Lead, Arsenic, Chromium and other heavy metals and also other chemicals. She suggested to continue this work in a broad spectrum covering the whole area of Dhaka City and incorporating all the heavy metals and other chemicals so that we can build our standards in fixing different safe levels of chemicals for drinking safe water for us. Dr. H M Zakir from BAU joined the e-seminar as a co-author of the seminar paper and participated in the discussion.

Dr. Alamgir Hossain, Deputy Chief Microbiologist and Head, Dhaka WASA Central Laboratory joined the discussion and explained that before digging a water pump they conduct an in-depth survey and assess the feasibility so that there arises no problem of contamination related to heavy metals and from other contaminants. He expressed that the parameters of safe drinking water differ from country to country and also in different organizations.

Ms. Munira Sultana, NDC, DG-3 (Additional Secretary) from the Prime Minister’s Office thanked IUBAT, the presenters of the seminar, the audience for the time-bound e-seminar and she also mentioned that Dhaka WASA and the City Corporation will take appropriate steps to supply contamination-free safe water to the city dwellers.

Prof. Dr. M. Shohidullah Miah, in his address, greeted the Mayor for his active participation in the e-seminar and also other dignitaries from outside IUBAT and also all faculties, students and others from IUBAT. He mentioned that we have been doing research on several fields of Bangladesh and have got financial assistance from the Ministry of Science and Technology, KGF, APN and other local and foreign organizations.

Dr. Farjana Sultana, Associate Professor of IUBAT gave a vote of thanks to the participating personnel from IUBAT and also of different organizations. 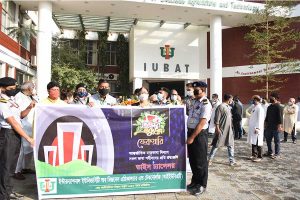 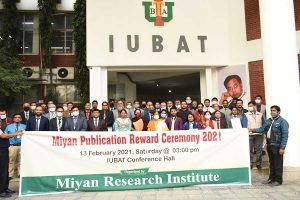 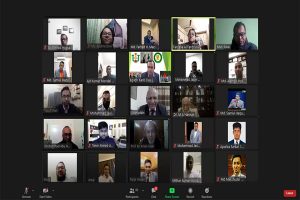